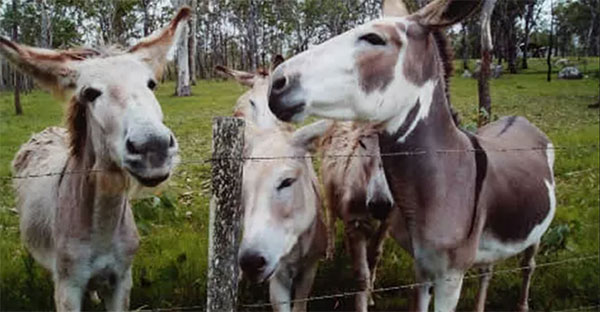 MEET SOME OF OUR DONKEYS

The Banka Boys (and Three Girls)

Ten of our donkeys joined us from Brunchilly Station, an outstation of BANKA BANKA station in the Northern Territory. This is the story of how they arrived.

Many of the feral donkey population in the Western Barkley region are descended from the Banka Banka Dray teams that were replaced by motor vehicles after World War II The donkeys were released into the wild when no longer required. Donkeys were preferred to horses as they needed less feed and were resistant to the poisonous plants endemic to the region. (The Barkley Roadhouse has items of donkey harness, collars and donkey packsaddle frames on display.)

These donkeys were bred as draught animals and have strong bone structure and are generally larger than average donkeys. These donkeys are ideal pack animals.

For these reasons arrangements were made with Bernie Harte, who was working on Brunchilly Station, to obtain eight feral donkeys. The donkeys were to be captured in spear traps which are simply yards placed around water points fitted with gates that allow stock to enter but stop them walking out. The donkeys are a by catch of trapping cattle. Trapped donkeys are generally shot as they have little value and are regarded as pests.

Our donkeys were assembled at Brunchilly and Bernie, once a contract horse trainer, started training and breaking them in.

The next challenge was to transport ten wild donkeys 2500km to Herberton. The cost of floating them two at a time was far too much, so Danny Bird, a stockman, Station Manager, and now stock transport contractor, accepted the job. Danny had never been to the Northern Territory before, so he regarded the job as a bit of an adventure.

Danny departed the Atherton Tablelands for the west on Thursday accompanied by my self as co-driver. We arrived at Camooweal at 5.00AM. Once a centre for drovers and a Queensland Customs Post, Camooweal is now a shadow of its former self. As we drove into town with about 600km to go, we were surprised to see an unusual number of road trains and other large trucks crowding the main street. Early storms higher in the catchment had flooded The Georgina River and the police had closed the crossing. We duly inhabited the roadhouse, walked down to inspect the crossing, and returned to the Roadhouse along with throngs of other heavy transport drivers. Eventually, after many threats of mutiny, the police reopened the road and we commenced the crossing of the Barkley Tablelands just before dark. As we approached the Three ways, we were chased by huge thunderstorms that followed us the forty km from the highway into Brunchilly.

Bernie met us at 11pm and quickly sorted out a late supper and space for our swags.

Despite little sleep in the previous two days we were up early to salvage a station vehicle that had become bogged the previous day, and a quick look around the property.

We then loaded the donkeys using the cattle ramps. The donkeys had to be run through several yards of bulls undergoing fertility testing then up into the truck. We made use of space in the truck to add Bernie’s collection of memorabilia accumulated during over 30 years of working on various stations. An early lunch and we were heading East to Mount Isa to collect the tick release certificate and waybill. Fortunately Brunchilly was declared “Tick free” and we could move the donkeys without having to unload them at Cloncurry for spraying. This would have added at least 6 hours to the journey and considerable expense.

The storms had persisted across the Barkley and we had a couple of deep creek crossings east of Camooweal. We arrived in Mount Isa safely and collected a feed and the waybill from a Roadhouse, then continued to Normanton, Croydon, and Georgetown for breakfast, having driven in shifts all night. The donkeys were unloaded at Kalinvale at 1.30pm Saturday, 3 December 2000, barely 24 hours since leaving Brunchilly!

Illustration 6: In the Race- Brunchilly